Responding to the call of the CPI (M) Maharashtra state committee, over 33,000 rural poor comprising mainly peasants and agricultural workers held demonstrations on district collectorates and tehsil offices in 19 districts of the state on May 14, 2012. The vital issue taken up was that of the severe drought currently stalking Maharashtra and the utter insensitivity of the Congress-NCP-led state government in dealing with this issue affecting crores of people and also lakhs of cattle.

GENESIS OF CHRONIC DROUGHT
After dithering for weeks, in the beginning of May the state government finally admitted that 7753 villages in 15 districts were drought-affected. As always, this was also a gross underestimate, based on the ridiculously false ‘paisewari’ estimates of crop produce that are still based on the crop production criteria set up during the British colonial era!
Today, the situation in thousands of villages is grave. There is great scarcity and even complete absence of drinking water. Wells have run dry. Dams and reservoirs are depleted. There is lack of adequate fodder for cattle. Maharashtra is one of the worst states in the country so far as the implementation of MNREGA is concerned. Last year in 17 districts not even a single man day of work was provided. The wage paid is a pittance. The public distribution system is in shambles and is riddled with corruption and black-marketeering. To add to the woes of the drought-hit, load-shedding of power has increased to the tune of 12 to 16 hours a day in the rural areas.

Drought is by no means a new phenomenon in Maharashtra. It recurs every three to four years. The number of tehsils that were earlier declared to be chronically drought-prone was 87. This figure has now crossed the 100 mark. Beyond setting up several Irrigation Commissions one after the other, successive state governments – be they of the Congress, Shiv-Sena-BJP or Congress-NCP - have done nothing. None of the recommendations of these Irrigation Commissions have been implemented.
For instance, some of these Commissions had said that with optimum utilization of both groundwater and surface water resources, 45 per cent of the land under cultivation could have been brought under irrigation. But what is the actual situation? As per the Economic Survey of Maharashtra 2011-12, when the state of Maharashtra was formed in 1960, 6.5 per cent of the cultivated area was under irrigation. It rose very gradually to 8.4 per cent in 1970-71, 12.3 per cent in 1980-81, 15.2 per cent in 1990-91, 17.8 per cent in 2000-01, and just 17.9 per cent in 2010-11. Dry land agriculture over 82 per cent of the area in the state has been suffering immensely as a result. It must be noted that the cultivated land under irrigation in India as a whole is 45.3 per cent.

The nadir was reached in the last ten years. As part of the running battle between the Congress and the NCP (the NCP has long held the Irrigation portfolio in the state), chief minister Prithviraj Chavan declared recently that after spending Rs 70,000 crore on irrigation in the last ten years, the proportion of irrigated land increased by only 0.1 per cent. He announced that a White Paper on the issue would be published. This led to a war of words between both the parties in the ruling alliance.
Another significant issue concerns the massive escalation of irrigation expenses. The Irrigation Commissions in the early 1960s had opined that with an expense of 1,300 crore rupees, 30 per cent of the land could have been brought under irrigation by 1980. Today the chief minister says that a sum of 77,000 crore rupees would be required for the completion of incomplete projects! Needless to say, a significant part of this cost escalation is directly related to rising corruption at all levels. Now the rulers say that since such massive outlays are not possible, priority would be given to water conservation schemes. Nothing stopped them from doing so for the last several decades.
The third issue is the completely skewed nature of the distribution of irrigated water. It is well known that sugarcane is a water-guzzling crop. It is equally well known that Maharashtra is ruled by an alliance of the big bourgeoisie and the sugar lobby, predominantly from Western Maharashtra. As Kumar Shiralkar wrote recently in the CPI(M) state committee weekly ‘Jeevanmarg’: “In 1950, 45 per cent of irrigation water went to sugarcane. This rose to 60 per cent in 1987. In the last ten years, although Rs 70,000 crore spent on irrigation has come to naught, in 2011 the proportion of irrigation water going to sugarcane has reached 70 per cent. Today the average amount of water in the dams in the state is 23 per cent. In Vidarbha it is only 12 per cent. In 12 dams it is zero. In the medium and small irrigation projects it is between 11 to 15 per cent. It is in such a grim situation that 70 per cent of irrigation water is being given to cane, which occupies only 4.5 per cent of the cropped area.”

The last issue concerns the neo-liberal prescription - privatization of water resources and diversion of water to the rich in the cities and to SEZs, at the expense of the countryside. As a major step towards privatization, the Maharashtra Water Resources Bill was hurriedly passed and in 2005, the Maharashtra Water Resources Regulatory Authority was set up. Since the state government claims that it has no money to set up or complete irrigation projects, the policy of allowing private players in this sector began in right earnest, with all the attendant ill-effects on water-users.
Simultaneously, a drive began to divert scarce water resources from the rural areas to the uncontrolled expansion of the cities to cater to the interests of the builder lobby, and to SEZs. It was this same drive that led last year to the peasant resistance and police firing at Maval in Pune district, which killed three farmers, including a woman. It is now proposed to build as many as ten dams by displacing thousands of Adivasis and others from several villages in the Thane and Raigad districts adjoining Mumbai. Thane district, which has some of the largest dams and water reservoirs in the state, has only 2 per cent of irrigated land and there is great scarcity even of drinking water in several tribal-dominated tehsils.
On the other hand, it has been reported that Mukesh Ambani’s new 27-storey residence ‘Antilia’ in Mumbai, built at a cost of Rs 9,000 crore, is provided 60 lakh litres of water per month! While most of the state is in darkness due to power load-shedding (which is itself a direct result of the power privatization policy of the ruling classes that led to the Enron fiasco, and is now being compounded by the Jaitapur nuclear power project drive), the monthly electricity bill of this modern-day Ambani palace is to the tune of Rs 70 lakh! This is only one instance amongst many in Mumbai.
STRUGGLE AGAINST DROUGHT
The CPI(M) Maharashtra state committee, which met on April 29, decided to launch an independent struggle on the issue of drought with two objectives in mind. The first was, of course, to ensure that immediate relief in the form of drinking water, employment, ration grain and fodder reached the people and their cattle. Towards this end, a charter of demands was prepared by the state committee. The second was to highlight the bankrupt ruling class policies briefly outlined above that had led to plunging the state in a chronic drought situation over the last several decades.

The two districts where the biggest mass actions were held were Thane and Nashik districts. Over 12,000 people stormed 7 tehsil offices in Thane district and over 11,000 people stormed 9 tehsil offices in Nashik district. In Thane district, the people gheraoed government offices in four tehsil centres and did not move until the authorities gave written assurances on their demands. At Igatpuri in Nashik district, over 500 people blocked the Mumbai-Agra National Highway.
In the Akole tehsil of Ahmednagar district, which hosted the Party state conference in March, over 3,000 people were mobilized in several village level actions. In the South Solapur tehsil of Solapur district, over 2000 people led a road blockade. In Parbhani district, a 1500-strong demonstration marched to the district collectorate. In Hatkanangale in Kolhapur district, a 1000-strong demonstration was held. In Nandurbar district, road blockades were organized in four tehsils, and nearly 400 people were arrested.
Similar actions took place in districts like Nanded, Beed, Jalna, Aurangabad, Hingoli, Amravati, Buldana, Jalgaon, Satara, Sangli and Raigad districts. Special mention must be made of demonstrations held by the Party in the urban centres like Mumbai, Nashik, Jalna and Aurangabad, where the working class raised the demand of the peasantry for drought relief. The actions in Solapur, Kolhapur and Parbhani districts also mobilized the working class along with the peasantry. In Pune, a Convention on Water was organized by left and secular parties.
All these mass actions succeeded in wresting concessions and immediate action from the government authorities for drought relief. Most of these actions were well covered by both print and electronic media, some of whom reported that it was only the CPI(M) among all other political parties in the state that took up concerted cudgels against the severe drought situation in the state. 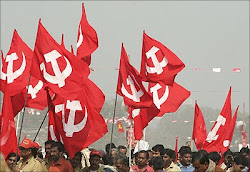 All India Kisan Sabha (अखिल भारतीय किसान सभा; AIKS), is the largest national organisation representing peasants in India, with a membership of 2,25,81,308 (22.58 million). The AIKS, which was formed at its first conference on April 11, 1936 at Lucknow, has a glorious 75-year history. It played a stellar role in arousing the peasantry against British imperialism in the movement for national freedom. It was able to unite various sections of the peasantry in the struggle against feudalism, big traders and monopolists. The AIKS led historic peasant struggles in Telangana in Andhra Pradesh, Tebhaga in West Bengal, Punnapra-Vayalar and North Malabar in Kerala, Surma Valley in Assam and tribal movements in Tripura and Maharashtra.

In the period after independence, it has continued to organise peasants against the anti-peasant policies of the government. These policies have acquired a particularly disastrous nature during the last two decades of neo-liberalism, leading to suicides of over 2.5 lakh debt-ridden peasants in the last 15 years. The strong peasant movement built by the AIKS has contributed to the formation of the Left-led state governments in West Bengal, Kerala and Tripura.

The AIKS believes that a powerful agrarian movement has to be built on alternative policies centred on the interests of the poor peasants and agricultural workers, both of whom constitute the overwhelming majority of the Indian peasantry. The AIKS is clear that only a thoroughgoing agrarian revolution can truly solve the deep and growing crisis in Indian agriculture.